President and Chief Executive Officer Larry Merlo stated, “In 2017, we delivered on the four-point plan we set in place to return to more robust levels of growth. Our position in the evolving health care landscape is stronger than ever before, and we remain confident in our model and in our ability to make health care more affordable, more accessible and more effective.”

Consolidated operating profit for the three months ended December 31, 2017, increased $108 million, or 3.6%, to $3.1 billion. The increase was partially due to improvement in gross profit in the Pharmacy Services Segment as result of a favorable shift in the timing of Medicare Part D profits between the third and fourth quarters of 2017, when compared to 2016, as well as growth in network and specialty volume, and favorable purchasing economics. In addition, the Retail/LTC Segment gross profit increased, largely driven by improvements in front store margin. The improvements in operating profit were also due to a $50 million decrease in acquisition-related transaction and integration costs as well as a $30 million decrease in store rationalization costs. These improvements were offset by increases in operating expenses associated with new store openings, and by a $46 million goodwill impairment of our RxCrossroads reporting unit. This impairment was triggered by the Tax Cuts and Jobs Act (the “TCJA”), enacted in December 2017, which reduced the U.S. federal corporate income tax rate from 35% to 21%. As a result of this change in rates, RxCrossroads’ deferred income tax liabilities decreased and its net assets increased. RxCrossroads was subsequently sold on January 2, 2018 below its net asset value.

Consolidated operating profit for the year ended December 31, 2017, decreased $849 million, or 8.2%, to $9.5 billion. The decline was primarily driven by the previously-announced restricted networks that exclude CVS Pharmacy and continued pricing and reimbursement pressure in the Pharmacy Services Segment and Retail/LTC Segment. The decrease in operating profit was also due to an increase in operating expenses as a result of charges of $215 million associated with the closure of 71 retail stores in connection with our enterprise streamlining initiative, goodwill impairment charges of $181 million related to the RxCrossroads reporting unit within the Retail/LTC Segment, $57 million of hurricane related expenses which were predominately in the Retail/LTC Segment, and new store openings. The increase in operating expenses also reflects the absence of a 2016 reversal of an accrual of $85 million, in the Pharmacy Services Segment, in connection with legal settlements. These increases in operating expenses in 2017 were partially offset by a decrease in acquisition-related transaction and integration costs of $226 million, since the bulk of the integration costs associated with the acquisition of Omnicare, Inc. (“Omnicare”) were incurred in 2016.

Mr. Merlo stated, “We enter 2018 with the foundation to propel us to win across all of our businesses. I'm very pleased with the strong PBM selling season we had, with gross client wins of $6.2 billion, and our retail collaborations are expected to drive solid performance in our pharmacies. I’m also pleased with the progress we’ve made in providing superior value for patients, payors, and providers, and we look forward to the opportunities ahead to improve upon our progress.”

The Company revised its 2018 guidance to reflect the effects of the tax reform achieved through the TCJA. In addition to debt reduction, the Company is dedicating a portion of the benefits to additional investments in employees, data analytics, care management solutions, and service offering enhancements, a portion of which will be capitalized. The impact to the Company’s 2018 consolidated operating profit is expected to be at least $275 million.

Executive Vice President and Chief Financial Officer David Denton stated, “With $1.2 billion in cash benefits from the Tax Cuts and Jobs Act, we will be able to make strategic investments in our business in 2018 to stimulate greater growth over the longer term, and our updated guidance reflects this. These investments will accelerate our ability to continue to improve health outcomes and lower costs for patients. Additionally, we will spend at least half of the benefits on debt reduction as we look to lower our leverage ratio.”

As a result of these investments, the Company’s previous adjusted consolidated operating profit growth guidance of 1.0% to 4.0% for the full-year 2018 has been updated to down 1.5% to up 1.5%.

The Company expects to deliver adjusted consolidated operating profit growth of 0.5% to 4.5% for the first quarter of 2018.

CVS Health is providing non-GAAP information on a prospective basis that excludes certain items because of the nature of these items and the impact they have on the analysis of underlying business performance and trends. Management believes that providing this information enhances investors’ understanding of the Company’s performance. This information should be considered in addition to, rather than as a substitute for, information prepared in accordance with GAAP. CVS Health’s definitions of these non-GAAP items may not be comparable to similarly-titled measurements reported by other companies.

Adjusted operating profit is operating profit excluding the impact of acquisition-related integration costs, charges in connection with store rationalization, goodwill impairments, and adjustments to legal reserves in connection with certain legal settlements. Adjusted operating profit guidance, in addition to excluding the foregoing items, also excludes transaction costs related to the proposed acquisition of Aetna, as well as transaction costs for the divestiture of RxCrossroads. The Company believes that this measure enhances investors’ ability to compare the Company’s past financial performance with its current and expected performance. The most comparable GAAP measure is operating profit.

As there is uncertainty in connection with calculating the adjustments necessary to prepare reconciliations of adjusted operating profit, a non-GAAP financial measure, to the comparable GAAP financial measure, the Company is unable to provide these reconciliations without unreasonable efforts. The items, including, in particular, the additional excluded items identified above, could result in significant adjustments from the most comparable GAAP measure. Therefore, no reconciliations are being provided at this time.

The Company will be holding a conference call today for the investment community at 8:30 am (ET) to discuss its quarterly results. An audio webcast of the call will be broadcast simultaneously for all interested parties through the Investor Relations section of the CVS Health website at http://investors.cvshealth.com. This webcast will be archived and available on the website for a one-year period following the conference call.

No Offer or Solicitation

Additional Information and Where to Find It

Participants in the Solicitation 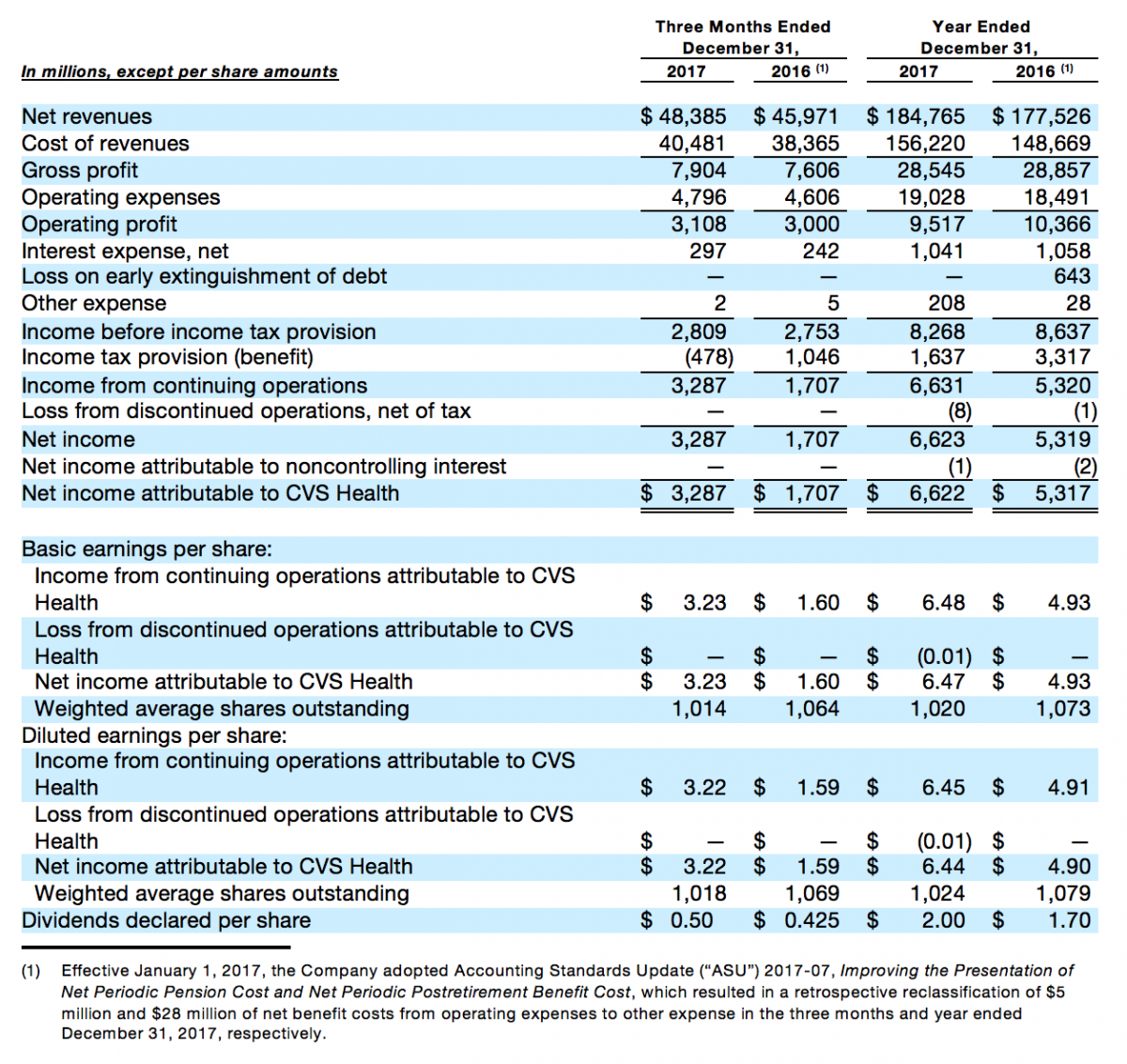 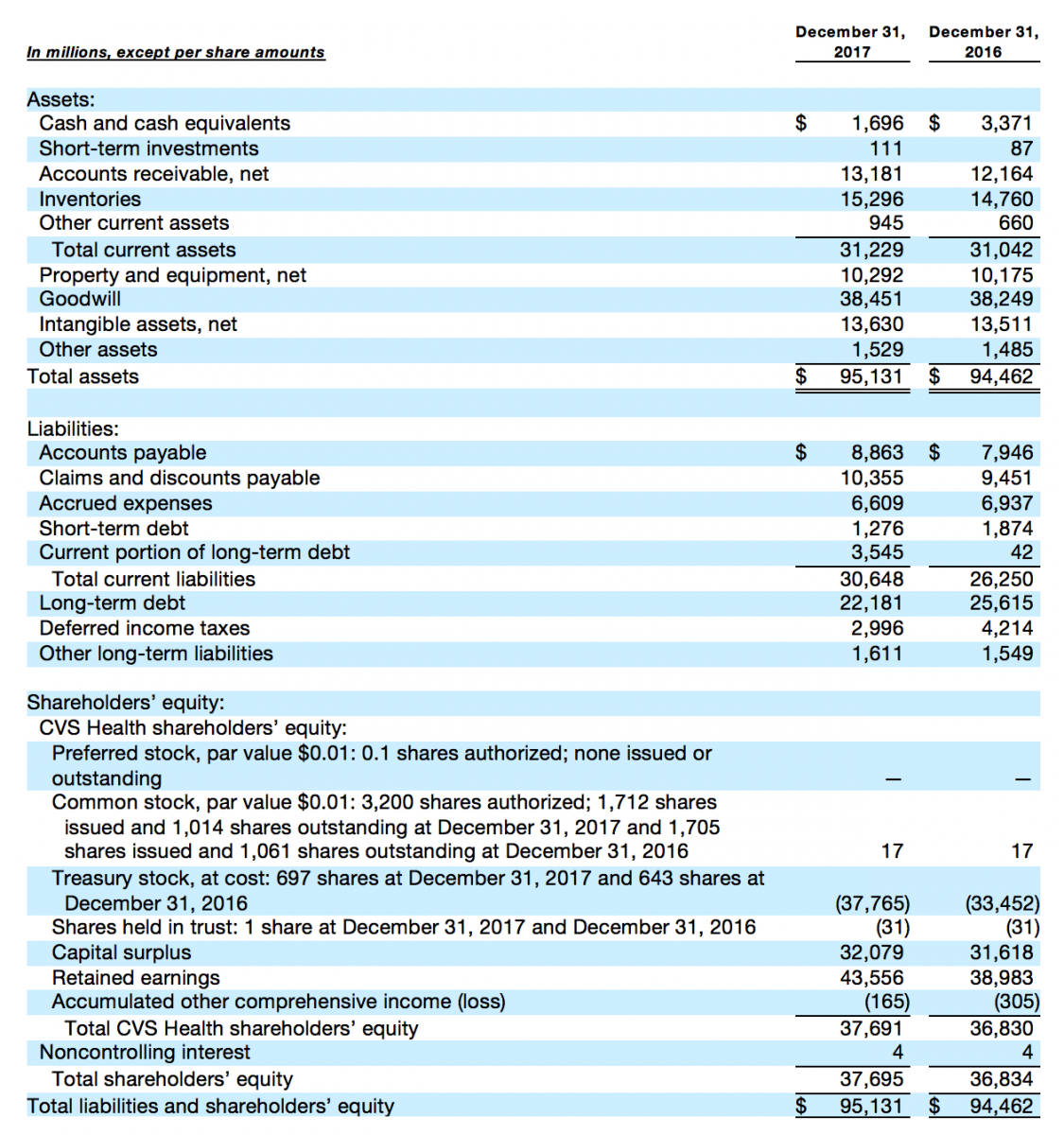 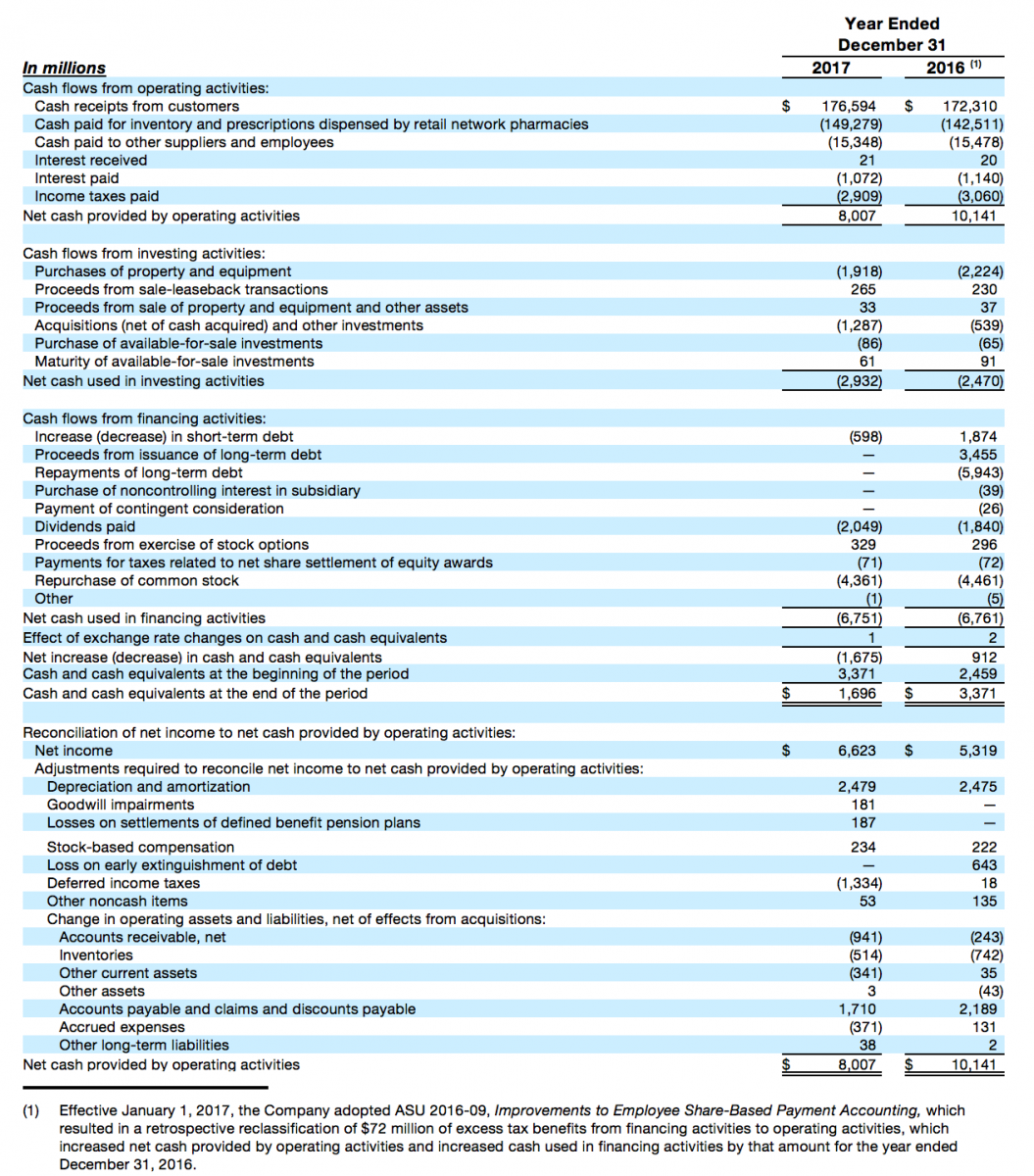 The Company defines Adjusted Earnings per Share, or Adjusted EPS, as income from continuing operations excluding the impact of certain adjustments such as the amortization of intangible assets, acquisition-related transaction and integration costs, acquisition-related bridge financing costs, transaction costs in connection with divestures of subsidiaries, goodwill impairments, charges in connection with store rationalization, losses on settlements of defined benefit pension plans, adjustments to legal reserves in connection with certain legal settlements, and losses on early extinguishments of debt and any other items specifically identified herein, divided by the Company’s weighted average diluted shares outstanding. The Company believes that this measure enhances investors’ ability to compare the Company’s past financial performance with its current performance. 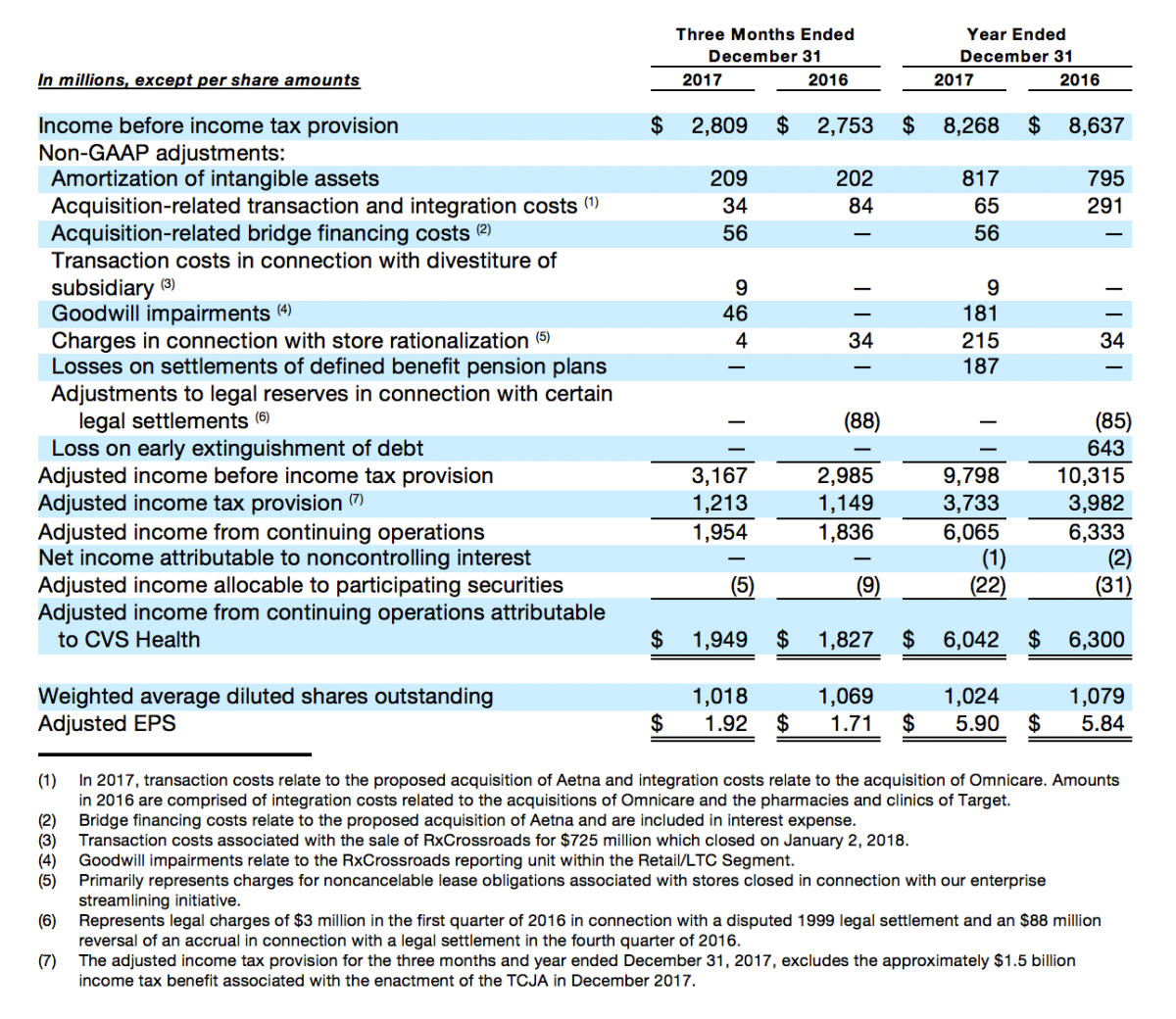 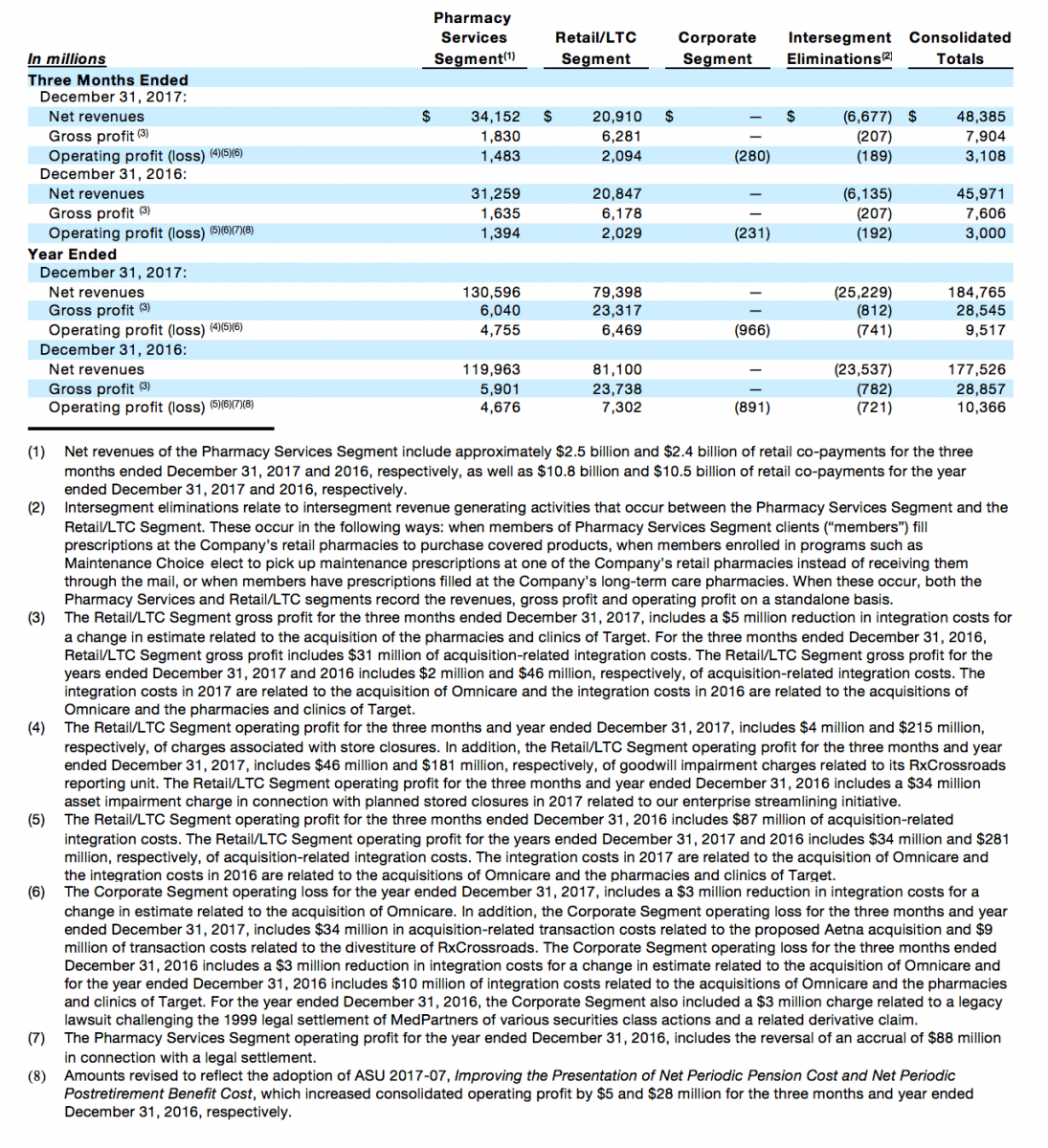 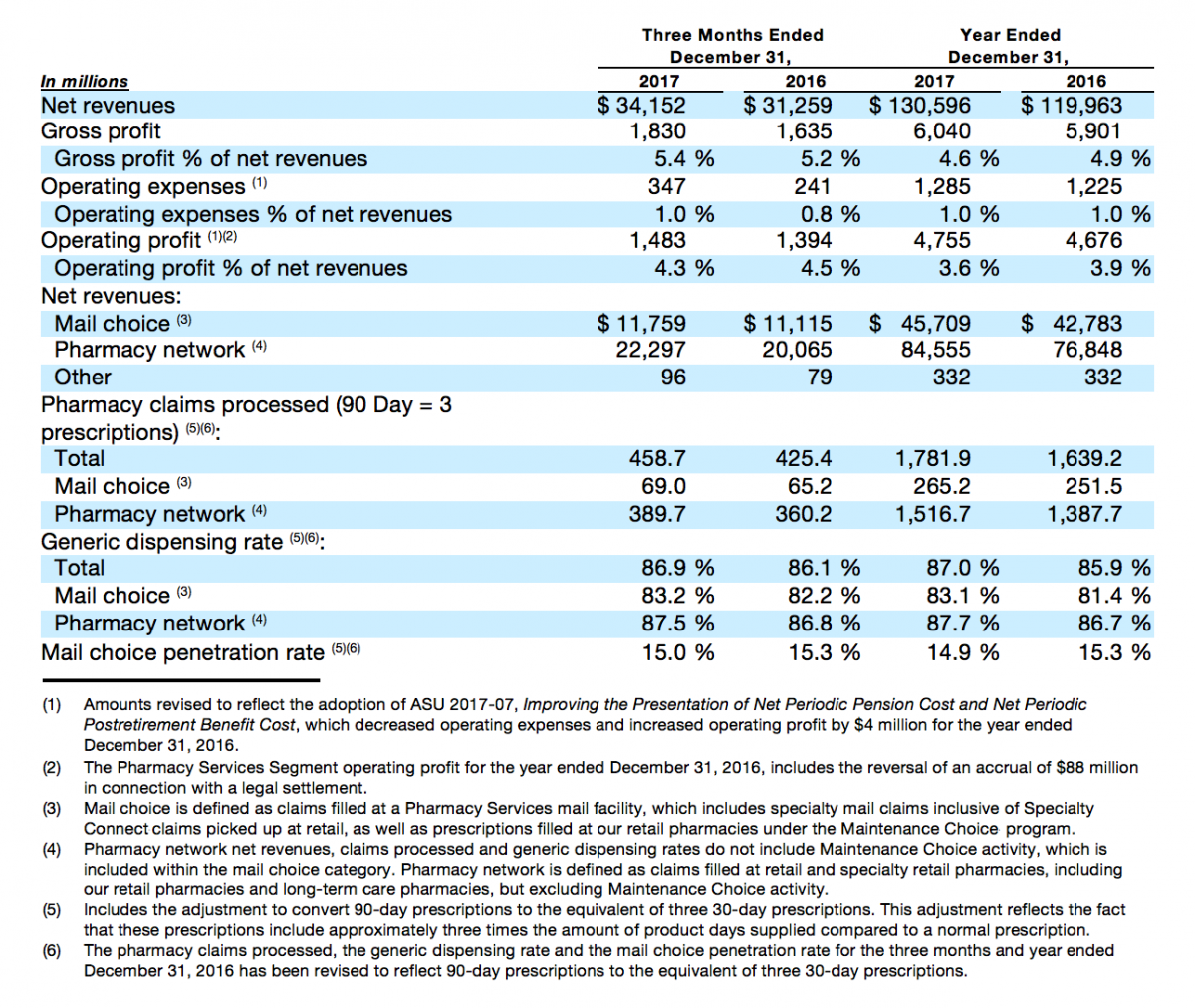 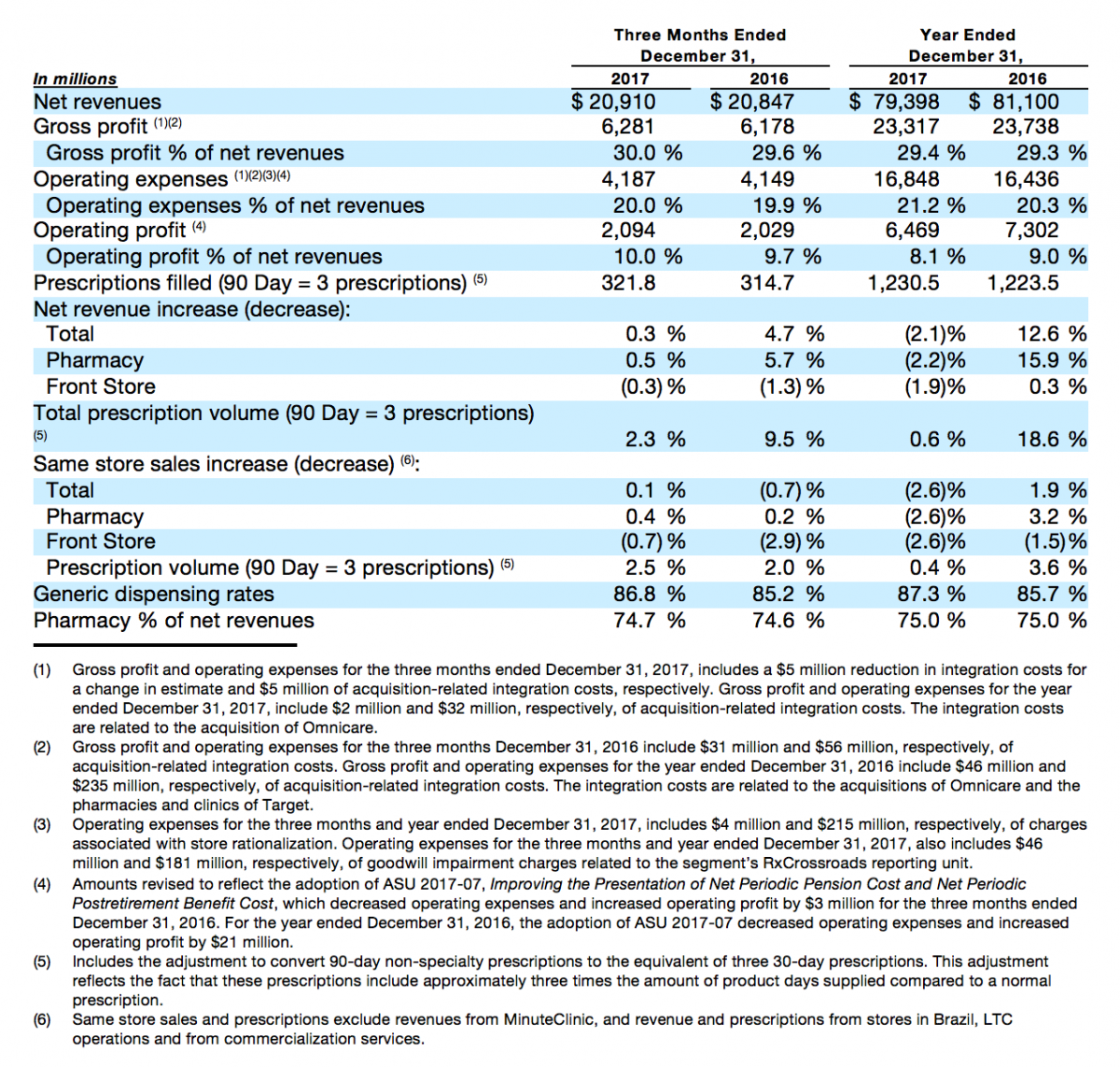