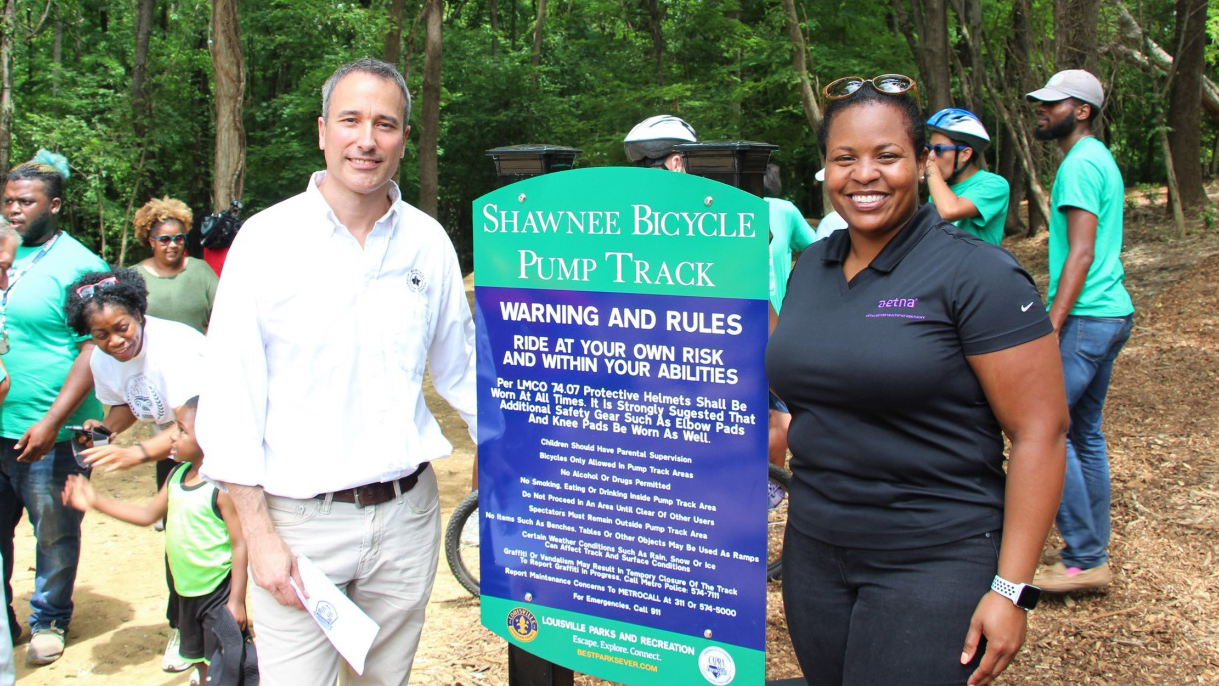 Louisville, one of the finalists of the Spotlight Awards handed out by the Healthiest Cities and Counties Challenge, unveiled its new bicycle pump track recently – part of several planned infrastructure improvements to provide healthy outdoor activities for young people.

The city hosted a ribbon-cutting ceremony on July 28 to celebrate the opening of the track, which was funded by the Aetna Foundation. A pump track is a type of off-road cycle sport consisting of banked turns that encourages riders to create momentum by up-and-down body movements.

“The new pump track is another exciting way for young people in West Louisville and throughout our city to experience the outdoors and have fun in one of the many award-winning parks right here in our community,” said Rep. John Yarmuth, one of the officials attending the ceremony.

The track is part of the West Louisville Recreational Initiative, a Spotlight Award finalist in the Healthiest Cities and Counties Challenge, a collaboration between the Aetna Foundation, National Association of Counties and the American Public Health Association. The challenge is awarding more than $1.5 million in prizes to small and midsized cities and counties who show measureable improvements aimed at keeping their residents healthier. Grand prize winners and runners-up will be decided at the end of the year.

“The Spotlight Award recipients, such as West Louisville Recreational Initiative, are outstanding examples of how important progress can be made when communities work together to address the challenges facing their neighborhoods and develop healthy, home-grown solutions,” said Dr. Patrice McGhee, director of community development for Aetna Better Health of Kentucky.

“We are delighted to support their goal of building a culture where residents connect to nature to improve physical and mental health by increasing physical activity and improving social cohesion to deter crime.”

“Working on this project helped us all learn how to solve problems and work together as a team,” said Jordy Hernandez, a senior at Central High School.

“It’s nice to see how much the kids enjoyed the track.”

The day’s activities were all part of a larger festival, West Louisville Appreciation Day. Before the ceremony, volunteers from Aetna Better Health of Kentucky helped plant trees and shrubs.