President and Chief Executive Officer Larry Merlo stated, “The second quarter results we posted today keep us nicely on pace to achieve our full-year targets. Operating profit in the Retail/LTC Segment was in line with expectations while operating profit in the Pharmacy Services Segment exceeded expectations. At the same time, we have generated substantial free cash flow year-to-date and continued to return significant value to our shareholders through dividends and share repurchases. While we are pleased to report results consistent with our expectations, we won’t be satisfied until the total enterprise returns to healthy levels of earnings growth.”

Mr. Merlo continued, “Given our performance in the first half and our confidence in our expectations for the back half of this year, we are narrowing and raising the midpoint of our Adjusted EPS guidance for 2017. Additionally, our differentiated value proposition continues to resonate in the marketplace. The 2018 selling season is shaping up to be another successful one for our PBM, with solid gross and net new business achieved to date.”

Revenues in the Retail/LTC Segment decreased 2.2% to $19.6 billion in the three months ended June 30, 2017. The decrease was largely driven by a 2.6% decrease in same store sales, an increase in the generic dispensing rate and continued reimbursement pressure.

Front store same store sales declined 2.1% in the three months ended June 30, 2017. The shift of the Easter holiday to the second quarter in 2017 from the first quarter in 2016 had an approximately 75 basis point positive impact. Front store same store sales were negatively impacted by softer customer traffic and efforts to rationalize promotional strategies, partially offset by an increase in basket size.

Consolidated operating profit for the three months ended June 30, 2017, decreased $240 million, or 10.2%. The decrease was partially due to a goodwill impairment charge of $135 million related to the RxCrossroads reporting unit within the Retail/LTC Segment. Additionally, the previously-announced restricted networks that exclude CVS Pharmacy and continued reimbursement pressure in the Retail/LTC Segment negatively impacted operating profit. This was partially offset by growth in pharmacy network claim volume and growth in specialty pharmacy in the Pharmacy Services Segment and a $71 million decrease in acquisition-related integration costs in the three months ended June 30, 2017 versus the same quarter last year.

Net income for the three months ended June 30, 2017 increased $174 million or 18.8%, to $1.1 billion. The increase was primarily due to the absence of a $542 million loss on early extinguishment of debt in the current year, partially offset by the $240 million decrease in operating profit and an increase in the effective income tax rate, from 39.5% to 41.1%. The increase in the tax rate was primarily due to the nondeductible goodwill impairment charge of $135 million, or 280 basis points, partially offset by $14 million in discrete tax benefits related to the required adoption of new accounting guidance for share-based compensation on January 1, 2017.

In the third quarter, the Company expects to deliver GAAP diluted EPS of $1.20 to $1.23 and Adjusted EPS of $1.47 to $1.50 which are affected by the timing of the Medicare Part D operating profit between the third and fourth quarters relative to the prior year, resulting from the variability between the quarters as members move through the risk corridor. The third quarter GAAP diluted EPS guidance also includes an estimated loss on the previously-disclosed settlement of a defined benefit pension plan.

The Company confirmed its 2017 cash flow from operations guidance of $7.7 to $8.6 billion and free cash flow guidance of $6.0 to $6.4 billion. These 2017 guidance estimates assume the completion of $5.0 billion in share repurchases. 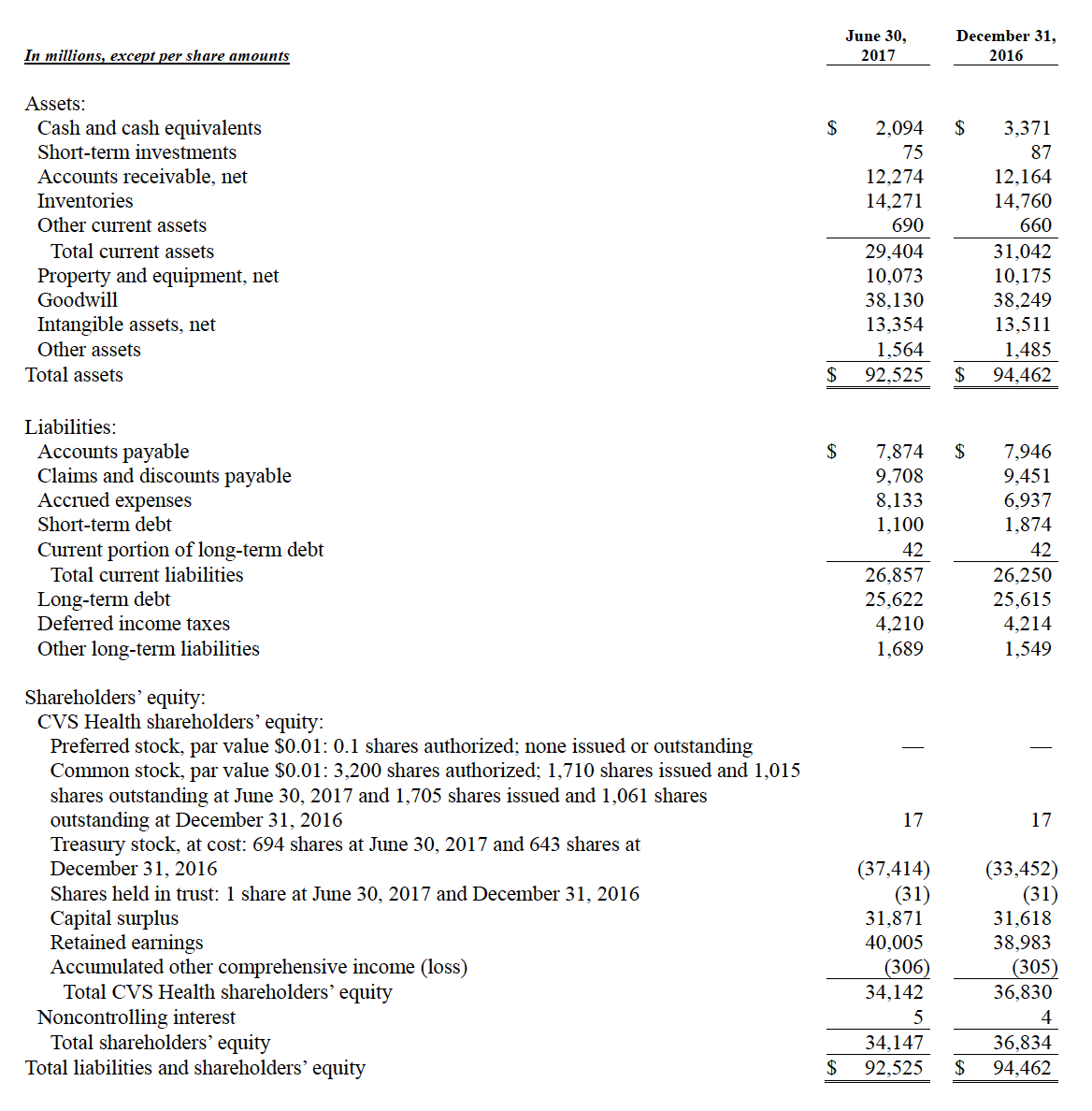 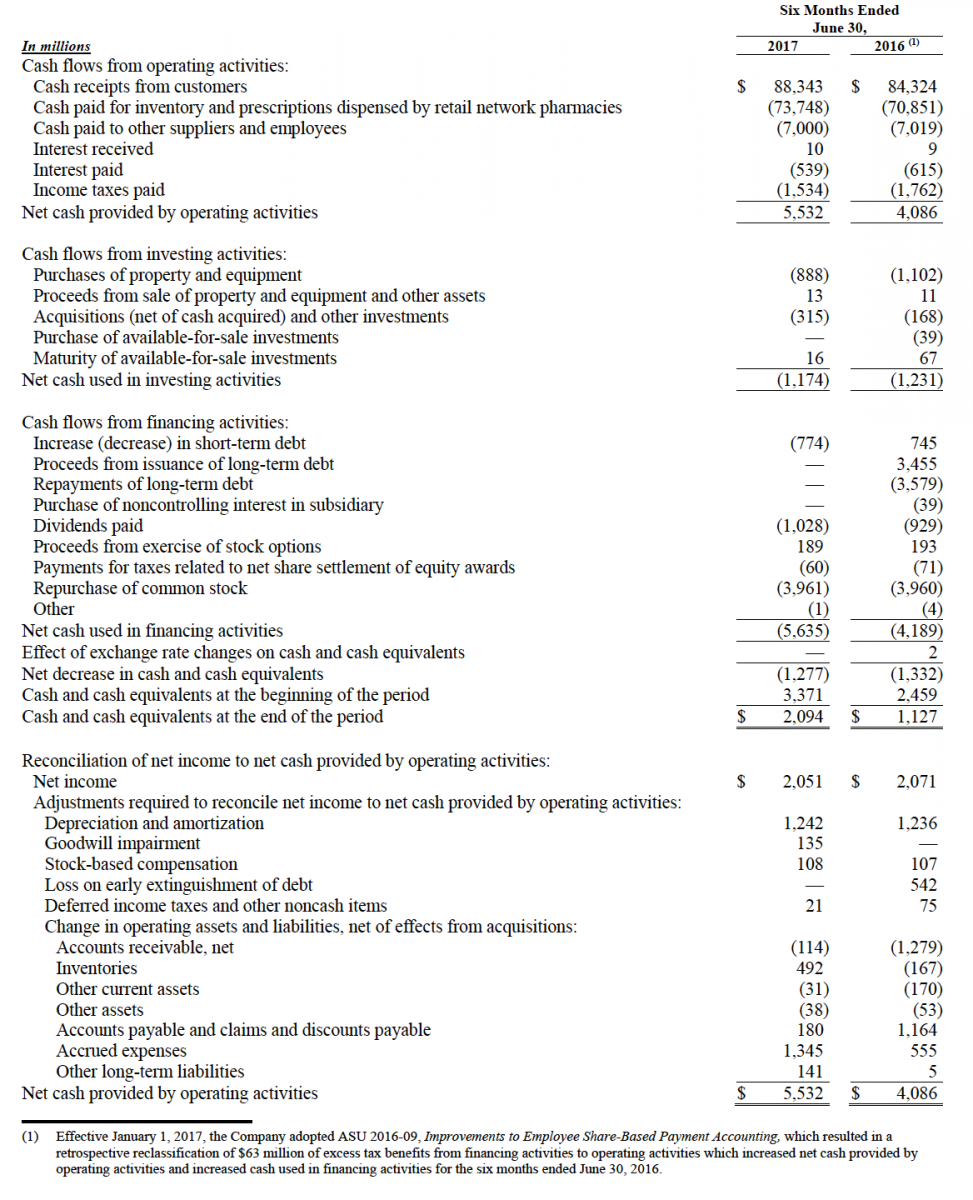 The Company defines Adjusted Earnings per Share, or Adjusted EPS, as income from continuing operations excluding the impact of certain adjustments such as the amortization of intangible assets, acquisition-related transaction and integration costs, charges in connection with store rationalization, goodwill impairments, adjustments to legal reserves in connection with certain legal settlements, losses on early extinguishments of debt, and losses on settlements of defined benefit pension plans, divided by the Company’s weighted average diluted shares outstanding. The Company believes that this measure enhances investors’ ability to compare the Company’s past financial performance with its current performance. 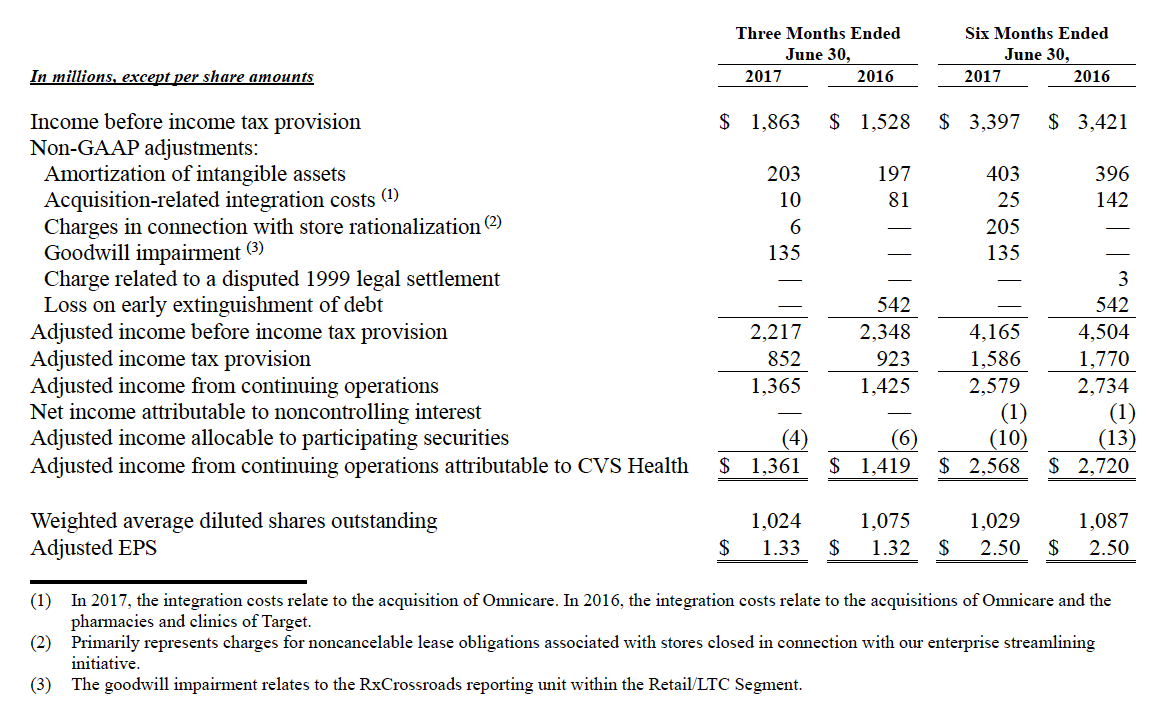 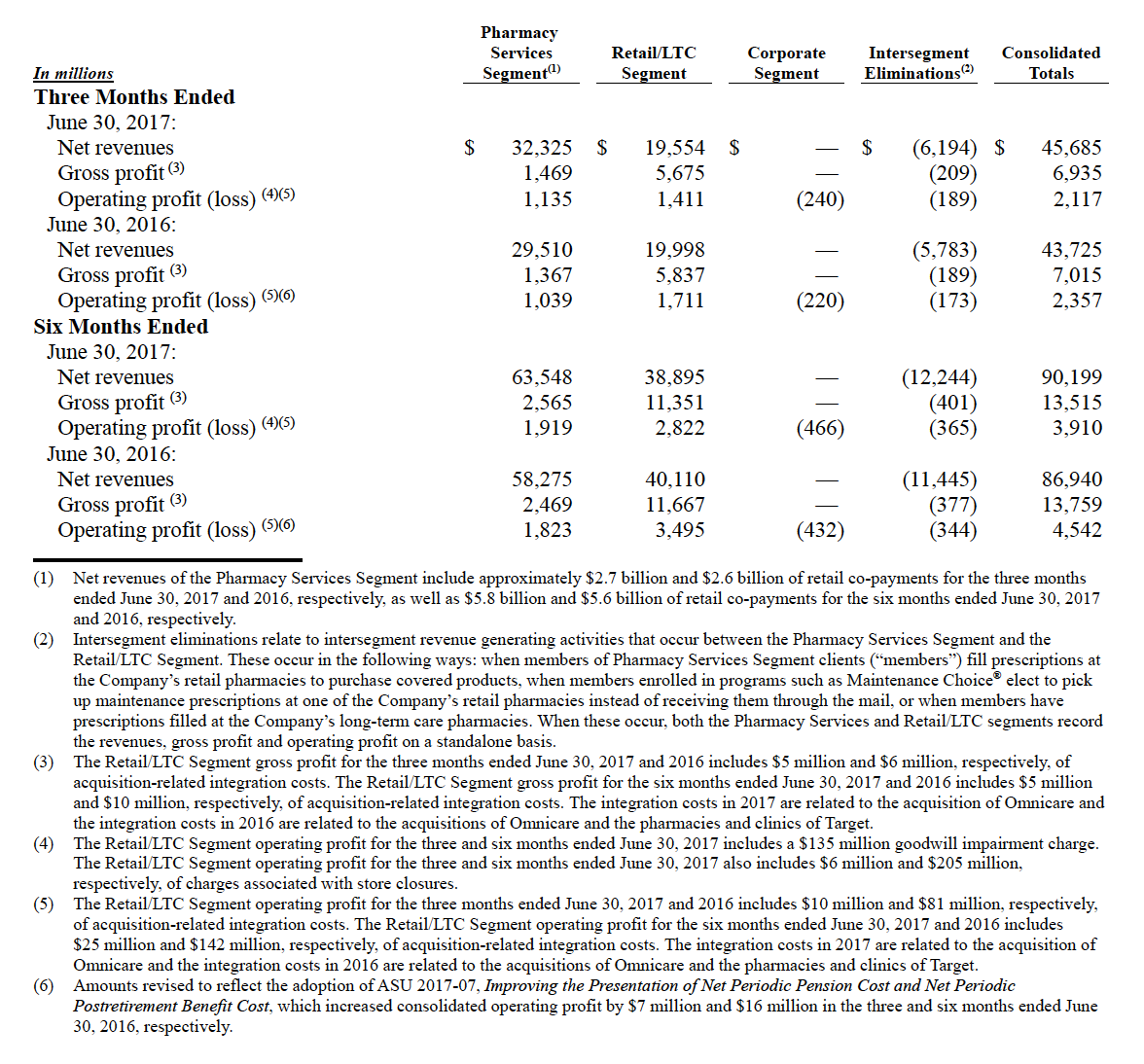 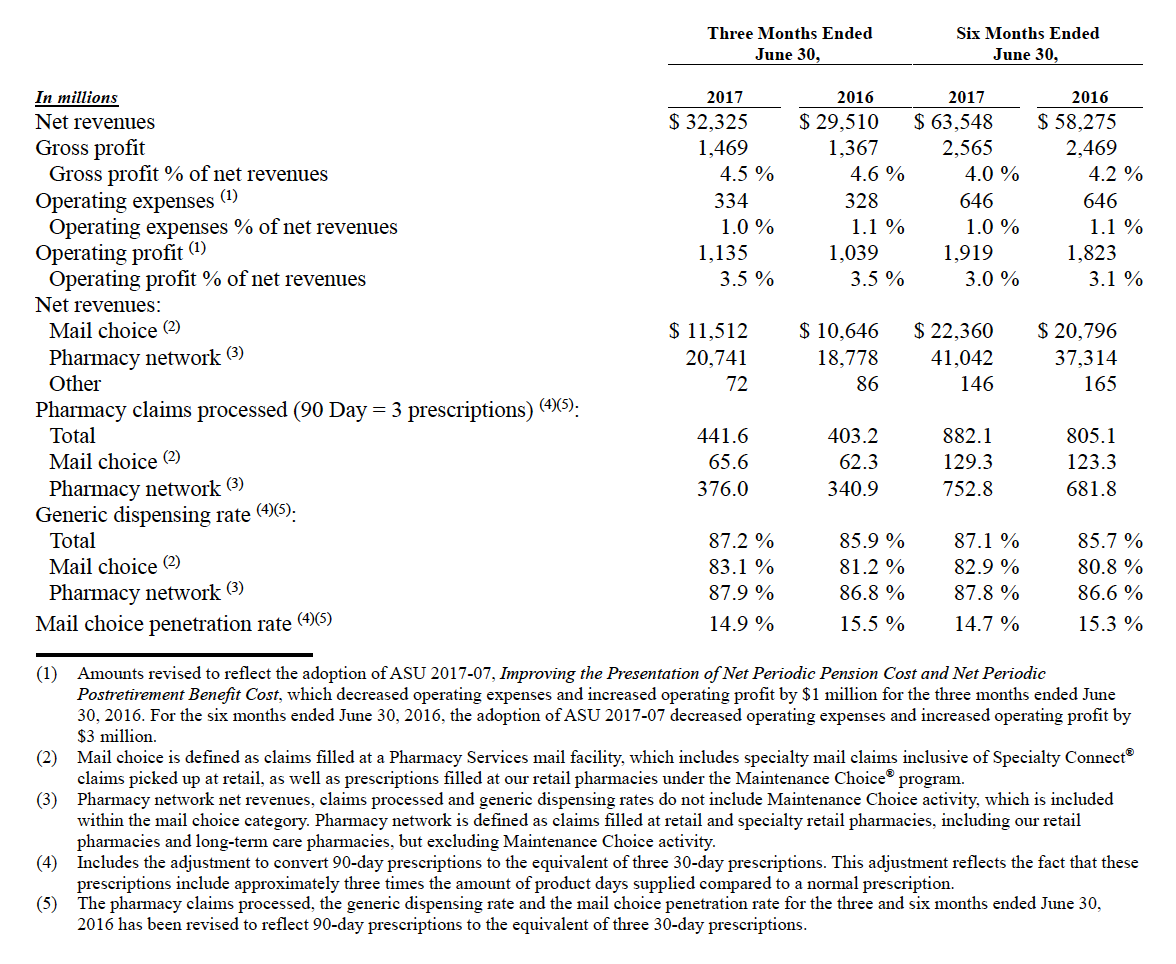 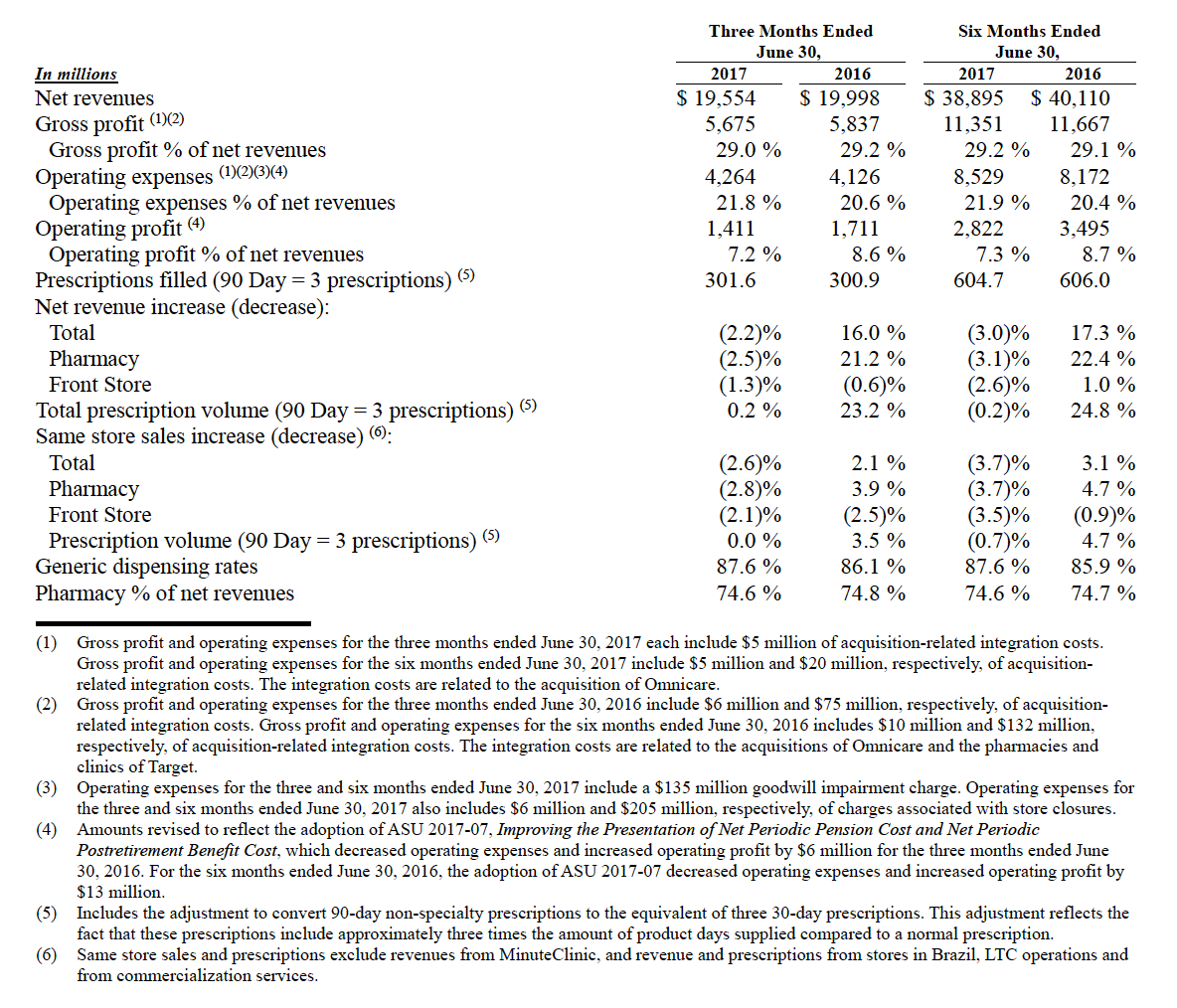 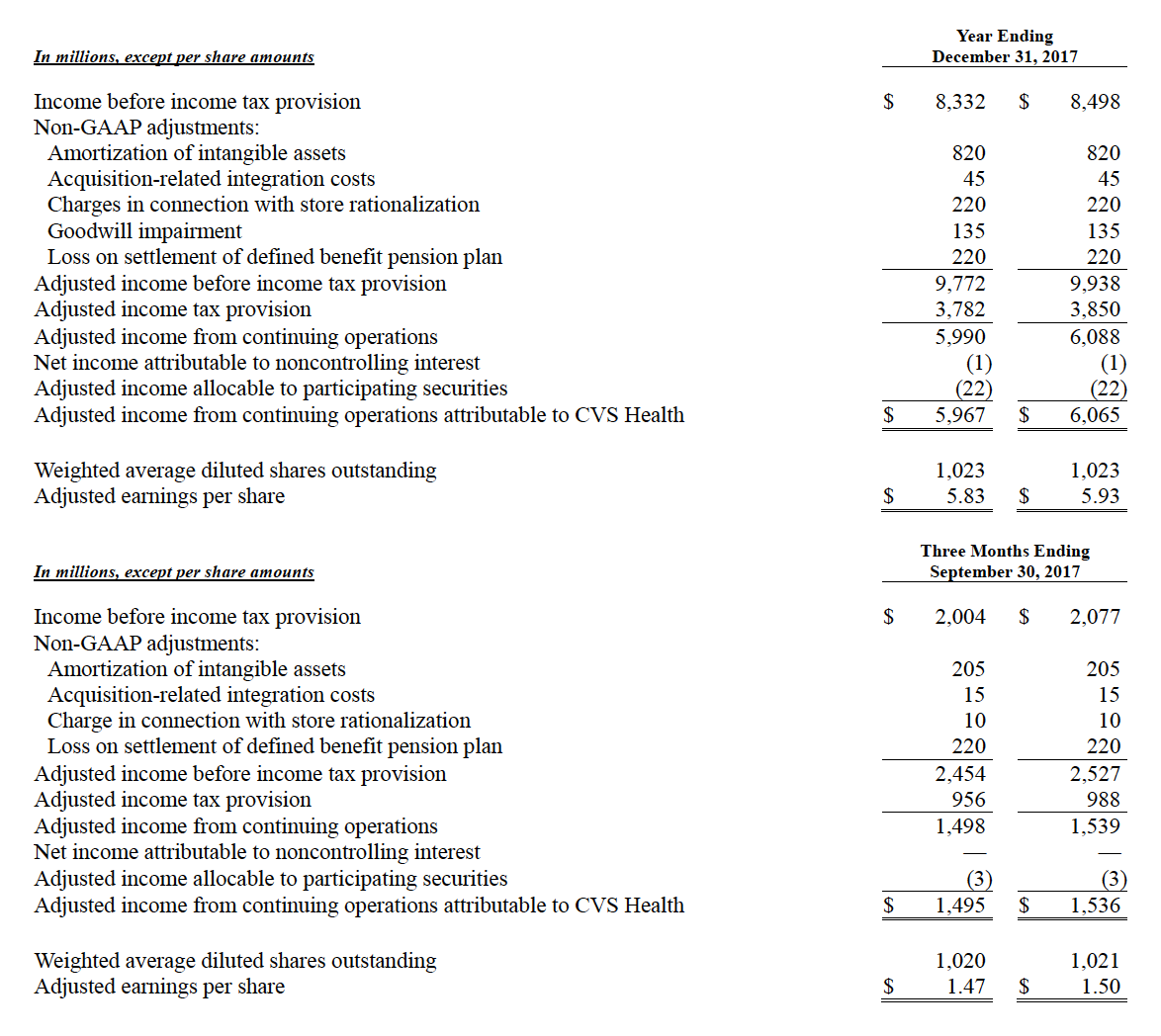