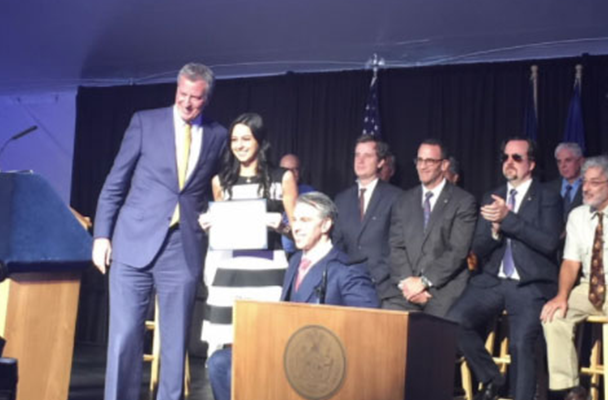 Signed in 1990, the Americans with Disabilities Act has fostered independence, empowerment and inclusion for millions of Americans living with disabilities. To honor and celebrate the passage of the ADA, each year, the City of New York presents four awards in recognition of individuals who have made significant contributions to increasing accessibility for people with disabilities known as the ADA Awards.

This year, the CVS Health New York City Regional Learning Center (RLC) team was recognized by the Mayor’s Office for People With Disabilities with the Title 1 Sapolin Employment award. This award recognizes the outstanding efforts from an employer in New York City to provide individuals with disabilities the opportunity to obtain competitive employment.

Amanda Tierney (RLC Manager), and Joana Lisboa (RLC Coordinator) were recognized for their work across New York City. Since 2014, more than 250 individuals with disabilities have completed a work experience program within CVS retail stores in New York City. In March 2017, the Regional Learning Center team opened a mock CVS training store at the Brooklyn Transition Center in Brooklyn, New York.