Combatting the Opioid Epidemic in Our Own Backyard 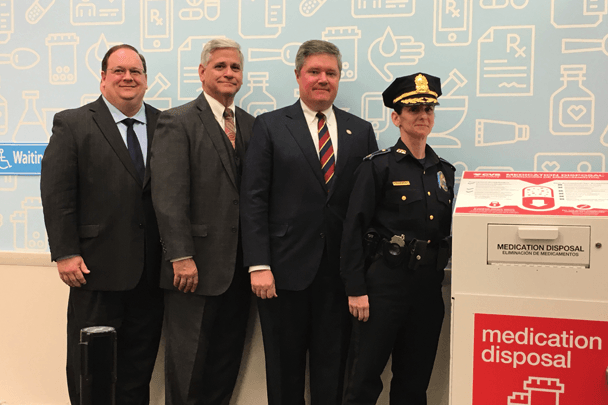 More than 30 medication disposal units have been placed in CVS Pharmacy locations and police stations throughout Rhode Island.

The abuse and misuse of opioids is currently considered among the most urgent health situations in our country. CVS Health, with a presence in nearly 10,000 communities nationwide, is combating this public health epidemic head-on through a multi-pronged, enterprise approach. And while our efforts are national, there’s a lot happening right in Rhode Island, where we’re headquartered. From state task forces to community-level programs and support, CVS Health is working hard to prevent and deter opioid abuse in its own backyard.

To support the efforts of local community organizations that are also working to combat opioid misuse and abuse, CVS Health and its Foundation has awarded grants to many nonprofits, including the following:

Statewide, Rhode Islanders have access to more than 30 medication disposal units provided by CVS Health that make it easier for customers to safely dispose of expired, unused and unwanted prescription opioids and other prescription drugs before they can be abused or diverted for illicit purposes. Sixteen of these units are located in police stations, which, to date, have collected more than 2.56 metric tons of returned medications. Additionally, units have been placed in 15 Rhode Island CVS Pharmacy locations across the state.

CVS Health has also taken its fight against opioid misuse and abuse to local schools and organizations. Through the company’s prevention education program, Pharmacists Teach, CVS Pharmacists have worked with schools and local community groups to educate teens and parents about the dangers of teens misusing prescription drugs. Locally, CVS Pharmacists have volunteered their time to deliver this curriculum, developed with the Partnership for Drug-Free Kids, to nearly 4,000 teens and parents since fall of 2015.

Helping to tackle the epidemic at the state level, Tom Davis, Vice President of Pharmacy Professional Services, sits on Governor Gina Raimondo’s Opioid Task Force, while Tyler Davis, senior advisor for Pharmacy Professional Services, is a member of the Naloxone Workgroup that is part of the Governor’s Task Force on Overdose Prevention and Intervention. This task force has developed the Overdose Prevention and Intervention Action Plan, which has set an ambitious goal to reduce opioid overdose deaths by one-third within three years.

CVS Health is also a pharmacy partner in the Maximizing Opioid Safety with Naloxone (MOON) study being conducted by Boston Medical Center and the University of Rhode Island. The three-year project aims to increase the availability of the opioid overdose-reversal drug naloxone in Rhode Island and Massachusetts communities.

Solving the opioid epidemic is a complex issue that requires collaboration across all sectors, and CVS Health is committed to being a part of the solution, both here in Rhode Island and across the country.