Antibiotic Resistance: Toward Better Stewardship of a Precious Medical Resource 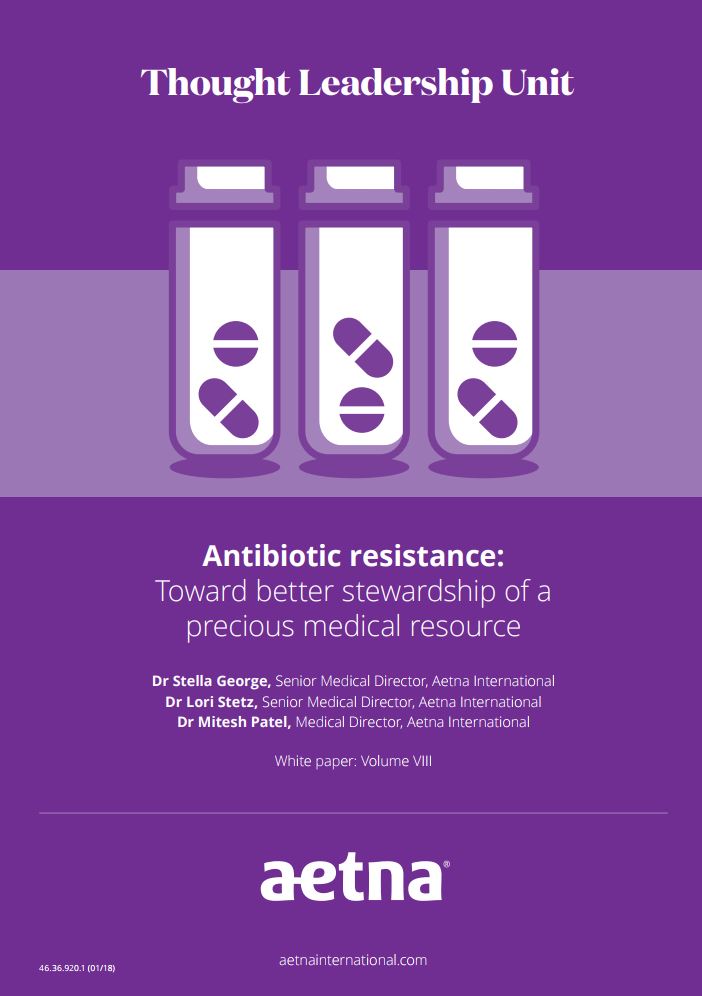 When 18-month-old Simon Sparrow woke up one morning in spring 2004, he was ill. By the afternoon, his face was swollen and he was having difficulty breathing. His parents brought him to the hospital, where he was diagnosed with septic shock and received antibiotics.

The next morning, Simon was dead.

Antibiotics are used to fight infections caused by bacteria. The overuse and misuse of antibiotics is accelerating the creation and spread of resistant bacteria, otherwise known as “superbugs.”

In a January 2018 white paper called, “Antibiotic resistance: Toward better stewardship of a precious medical resource,” Aetna International argues the antibiotic resistant bacteria crisis must be addressed through a global effort. The company believes the world must be better stewards of the antibiotics available today, while also working to develop more antibiotics for the future and address the underlying issues that led to the crisis.

“Stemming the rising tide of antibiotic resistance will take a global, multi-pronged effort. The industry must become better stewards of the antibiotics we have today, whilst working to develop more antibiotics for tomorrow,” said Mitesh Patel, M.D., a medical director at Aetna International. “A focus on harnessing big data will inform strategies that create better care for patients, as well as significantly decreasing the financial cost from antimicrobial resistance.”

The Centers for Disease Control and Prevention (CDC) estimates at least 2 million people become infected with antibiotic resistant bacteria each year in the U.S. Of those infected, about 23,000 dies from difficult to treat infections.

Although the biological causes of antibiotic resistant bacteria can’t be prevented, Aetna believes the societal causes – over-prescribing and misuse, use of antibiotics in agriculture, lack of research and poor hygiene and sanitation – can be addressed.

In the U.S., about 13 percent of outpatient visits, or 154 million visits each year, result in an antibiotic prescription, according to the Pew Charitable Trusts. Thirty percent of those prescriptions, or 47 million prescriptions, are deemed unnecessary.

Aetna sent letters to more than 1,100 clinicians in the United States in July 2017, who prescribed antibiotics to treat acute bronchitis, which is caused by a viral infection. The letters included information from the CDC on antibiotic resistant bacteria. This correspondence resulted in a significant percentage of the clinicians requesting further engagement with Aetna to tackle the issue.

The white paper also describes how health systems across the world are working to address the antibiotic resistant crisis. In India, multiple factors, such as high burden of disease, poor public health infrastructure, rising incomes and unregulated sale of cheap antibiotics, led to the country becoming one of the world’s largest consumers of antibiotics.

Indian Health Organization, an Aetna company, is taking a three-pronged approach to combat this. There is an emphasis on antimicrobial stewardship in clinical training. Audited medical consultations also include checking antibiotic prescriptions for dosage, duration and rationale for use. Physicians are also identifying and correcting antibiotic usage during consultations.

Aetna is also working with providers and members to increase awareness and education about antibiotic resistant bacteria and appropriate antibiotic use. The approach has led to antibiotic utilization across Aetna International’s membership to drop from 27 percent in 2014 to 18 percent in 2016.

Other organizations have also starting to take an increased look at combatting the antibiotic resistant bacteria crisis, according to the white paper. After Simon’s death in 2004, his mother partnered with the University of Chicago Medical Center and found the MRSA Research Center. The Research Center seeks to prevent, control and treat MRSA through scientific and clinical research, according to its website.