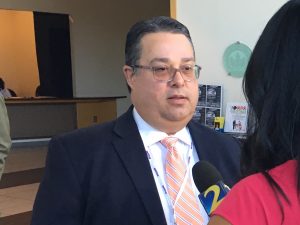 As part of our commitment to getting local and collaborating across sectors to help fight the opioid epidemic, Aetna supported the second annual opioid summit in Decatur, Georgia last week. Co-hosted by local non-profit, Stand Inc., and DeKalb County Commissioner Larry Johnson, the summit gathered more than 100 leaders from government, policy, social advocacy and community groups to address the current state of the opioid crisis in Georgia. At the event, it was announced that the Aetna Foundation would be donating $15,000 in Narcan kits to DeKalb County.

“The best way to help combat this epidemic is by working with leaders and members of the health community who are on the frontlines trying to reverse this trend,” said Frank Ulibarri, Aetna Georgia Market President. “Nearly a thousand Aetna employees call Greater Atlanta home. This issue is close to our hearts, and we know that our local communities need real solutions if we are going to fight this effectively. Our hope is that these kits, in the hands of DeKalb’s first responders, will save lives.”

According to Commissioner Johnson, opioid abuse and overdose is one of the most urgent public health crises facing his community.

In Georgia, opioid-related overdose deaths increased by 117 percent from 2010 to 2016, according to the Georgia Department of Public Health, part of an opioid epidemic in the United States that is becoming an unprecedented threat to our collective health.

“Narcan saves lives, and we need a ready supply. This donation equips our first responders with an increased supply to prevent fatal opioid overdoses in DeKalb County,” Commissioner Johnson said.

Dr. Daniel Knecht, Vice President of Clinical Strategy and Policy, provided a Narcan training session at the summit and participated in a panel discussion on the current state of the opioid crisis in Georgia.

“Over the past ten years, more than 200,000 Americans have died due to prescription opioid overdoses. That includes 64,000 people in the last year alone,” said Dr. Knecht, “That’s more than the HIV/AIDS epidemic when it peaked. That’s more than the entire Vietnam War.”

The Narcan kits contain nasal syringes prefilled with naloxone, which blocks or reverses the effects of opioids. The kits contain 408 doses and will be distributed by the DeKalb County Department of Health to first responders to help prevent opioid overdose-related deaths in the county.

The half-day summit featured 20 speakers from social advocates and health officials to policy makers and nonprofits. The panel topics ranged from connecting individuals to resources and treatments after an overdose to engaging the private sector to help prevent addiction among employees.

Aetna and the Aetna Foundation are confronting the unprecedented opioid crisis both through business practices and strategic philanthropic giving initiatives – tackling the issue from the ground up by collaborating with local communities and making focused interventions to members and provider partners along the entire spectrum of risk, misuse, dependence and recovery.