WOONSOCKET, R.I., July 10, 2019 /PRNewswire/ -- CVS Pharmacy, the retail division of CVS Health (NYSE: CVS), today announced the expansion of its safe medication disposal program in Ohio, adding disposal units in 53 CVS Pharmacy stores in communities across the state, including Cincinnati, Cleveland, Columbus, Dayton, Toledo and Youngstown. The expanded program is designed to help address the diversion and misuse of unwanted or unneeded prescription drugs in Ohio. 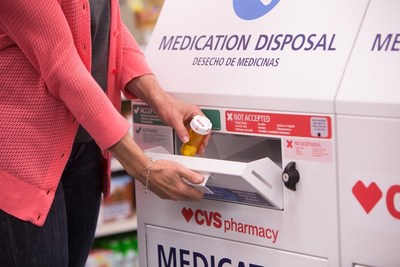 "When patients leave unused medications, especially opioids, in a medicine cabinet, there is a risk that those medications might be misused or diverted, which is why we have worked to help increase access to and awareness of safe medication disposal options in the communities we serve," said William Cuffari, R.Ph., and District Leader for CVS Pharmacy. "Providing more options for the proper disposal of unused medications is just one of the ways that CVS Health is working to help combat opioid misuse, in Ohio and across the country."

"The battle against the opiate epidemic continues locally and across the state of Ohio. The fight isn't over," said Wade Kapszukiewicz, Mayor of Toledo. "But, with each new resource and each new partnership developed we take another step towards victory. I commend CVS Health for answering the call to action and playing a role in the ongoing effort to create safer and healthier communities."

"On an almost daily basis, Toledo Police officers administer Narcan to individuals who have overdosed on opioids," said George Kral, Toledo Chief of Police and Vice President of the Ohio Association of Chiefs of Police. "These overdoses are not just from injecting heroin. We have seen increasing numbers of overdoses where the person gained access to opioids from discarded prescriptions or from improper storage in the home. TPD has had collection units in each of our three stations for several years. We are very happy that CVS is showing its commitment to keeping these dangerous drugs off of the streets of Toledo and across Ohio."

CVS Health's commitment to helping prevent and address prescription drug misuse extends to community education and increasing access to the opioid overdose-reversal drug naloxone. The company's Pharmacists Teach program brings CVS pharmacists to schools across the country to talk to students and parents about the dangers of prescription drug abuse. More than 500,000 students across the country, including over 19,000 in Ohio, have participated in the program.

CVS Pharmacy has worked with 48 states including Ohio and Washington, DC to increase access to the opioid overdose-reversal drug naloxone, also known as Narcan. Patients can obtain this potentially life-saving medication, which can reverse the effects of an opioid overdose, without an individual prescription in these states.

About CVS Pharmacy
CVS Pharmacy, the retail division of CVS Health (NYSE: CVS), is America's leading retail pharmacy with over 9,800 locations. It is the first national pharmacy to end the sale of tobacco and the first pharmacy in the nation to receive the Community Pharmacy accreditation from URAC, the leading health care accreditation organization that establishes quality standards for the health care industry. CVS Pharmacy is reinventing pharmacy to help people on their path to better health by providing the most accessible and personalized expertise, both in its stores and online at CVS.com. General information about CVS Pharmacy is available at http://www.cvshealth.com.