A Lifelong Struggle, a Tearful Reconciliation

In the year since Jeff Balek began working for the Guardian Angels program, where he reaches out to Aetna members who have survived an opioid-related overdose to connect them with support and resources, Balek estimates he has spoken to hundreds of people who nearly died from an opioid overdose, and he has heard hundreds of heart-wrenching stories. 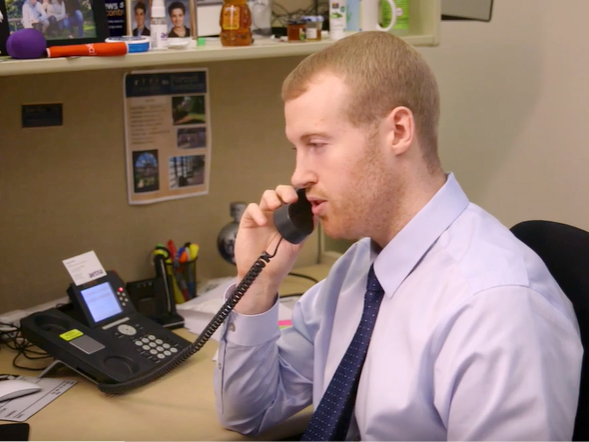 But one story stands seared in his memory above the others: A man in his 40s named Kevin, who struggled with addiction for most his life and was now sober for the first time in decades, whose greatest wish was to try to rectify his greatest regret — his estranged relationship with his mother.

The problem was that he had no idea how to find her. Or whether she even wanted to see him. He searched desperately for six months to locate her, and when he did, the news was staggering. She was living out her final days in hospice care, more than a thousand miles away in Florida.

Could he find the money to arrange the trip? Could he get there in time? And, most importantly: Would she welcome him if he did?

“All I want is to at least have a chance to make things right,” he told Jeff.

Closing the Gap Between Overdose and Much-Needed Treatment and Support

Kevin’s story is a poignant example of the devastation that opioids can wreak on a family, but also of the redemptive opportunities for people who seek and receive help.

Those opportunities are why Aetna launched the Guardian Angels program as pilot in 2018. The company’s data showed hundreds of people were visiting emergency rooms each month with opioid-related overdoses. They all had complex needs for treatment and recovery, but the ER doctors’ job was limited to helping them survive an overdose. Once they survived, they were on their own again. It was like being treated for frostbite but then sent back outside into frigid temperatures. Without a coat.

Guardian Angels is part of our company-wide commitment to help address the abuse and misuse of prescription opioids, which includes everything from a safe medication disposal program in Ohio to Pharmacists Teach, an outreach program that’s reached more than 450,000 students and parents since 2015.

The Guardian Angels program was designed to close that gap. Clinicians who specialize in addiction recovery call members after they’ve been discharged to lend support, to offer education, and to connect them to community resources.

To date, the program has helped more than 600 members and their families, and the Guardian Angels staff has gone from a single person to two — Balek works alongside clinician Ramona Zarate — and is looking to expand again.

“We reach out when the individual is most needing help and most susceptible to intervention,” Balek says. “They had a near-death experience. Their defenses are broken down. They’re on the brink of emotional deterioration.”

“Talking about substance use is difficult,” Zarate says. “It’s important to give the person a safe space to discuss their experiences, their fears and their hopes for the future.”

There is no shortage of need. More than 70,000 people in the United States in 2017 died from drug overdoses, and that number continues to grow. Balek estimates that he and Zarate each talk to as many as 10 people a day. Outreach and perseverance are key; it sometimes takes up to eight calls just to reach someone.

Once the connection is made, the angels’ conversations with the members can stretch for months. The idea is to continue providing support until the patient reaches what they call “early remission,” which usually takes about three months. But Balek says he never cuts anyone off. As long as they’re willing to talk, he’s willing to listen. There’s always a goodbye, eventually, but Balek wants to make sure it’s “goodbye for a good reason.”

In Kevin’s case, Balek stayed in touch for almost a year, as he struggled with facing the pain of his estrangement, as he searched for his mother, and as he wrestled with doubts about whether to approach her.

In the end, with Balek’s help and support, Kevin took the leap of faith and visited. To his relief, she welcomed him with open arms, glad to see him, and thrilled that he had shed his demons, at least for now. They shared the few good memories they had, back before addiction dug its claws into his life. They shared tears.

“The joy in his voice was incredible,” Balek says.

As he does with most of his patients, Balek eventually lost touch with Kevin. Last he heard, Kevin had found a job and a girlfriend, and had moved to Florida — almost as if he wanted a way to feel closer to his mother, as if her love and acceptance before she died made Florida feel like a safe, welcoming place.

Recently, Balek found notes from his last conversation with Kevin. These were what turned out to be the final words Kevin said to him: “I really didn’t think my Mom would see me doing well again. She got to see me looking good and clear-eyed and smiling. She got to see the real me, who always loved and cared for her.”

For more information about CVS Health’s efforts to improve care across the nation, visit our News & Insights page and the CVS Health Impact Dashboard. To stay informed about the latest updates and innovations from CVS Health, register for content alerts and our Leaders in Care newsletter.