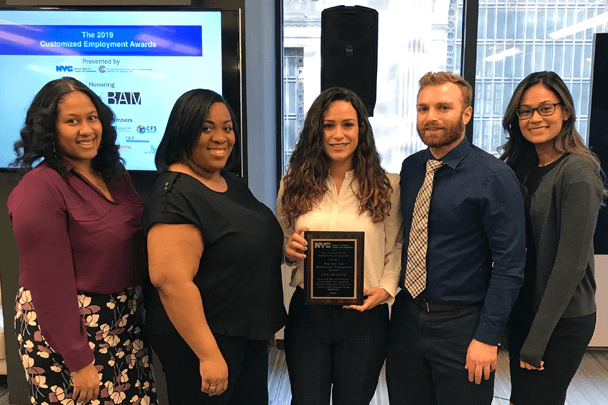 CVS Health Workforce Initiatives team members accept the Customized Employment Award for their work to provide training and employment to people with disabilities through our Regional Learning Center in New York City.

CVS Health has been recognized by the Consortium for Customized Learning in New York City for our efforts to provide employment opportunities for people with developmental disabilities.

The Customized Employment Award, given annually by the Consortium, in collaboration with the NYC Mayor’s Office for People with Disabilities, was presented to CVS Health by Commissioner Victor Calise at an awards ceremony on March 28.

Additionally, AHRC NY and Goodwill NYNJ are two of several agencies and schools that utilize our New York City-based Regional Learning Center (RLC) mock store to provide customized hands-on training to people with disabilities, allowing them to learn in a less intimidating environment, at their own pace before entering into a work experience program in a retail setting.

Workforce in NYC: Our Ongoing Training and Employment Programs

Since 2017, more than 220 people with disabilities have completed a work experience program within our New York City-based mock store and CVS Pharmacy retail stores, where they learn skills such as customer service, stocking, working within a team setting and conflict resolution. Additionally, the opening of our Brooklyn Transition Center in 2017 has provided another 380 students with disabilities with mock store training opportunities.

The Customized Employment Award is one of several that our RLC in New York City has received recently for its programs. In 2018, CVS Health was named Employer of the Year by Goodwill Industries of Greater New York and Northern New Jersey (Goodwill NYNJ) for being a leader in the vision to create a world with no employment barriers for individuals with disabilities. And in 2017, the Regional Learning Center (RLC) team was recognized by New York City Mayor Bill de Blasio’s Office for People With Disabilities with the Title 1 Sapolin Employment award. The award is given to employers in New York City that provide individuals with disabilities the opportunity to obtain competitive employment.

The training and opportunities provided through our nationwide network of Regional Learning Centers are part of our Abilities In Abundance program, which helps workers with disabilities access the security and prosperity that stable jobs can provide. Led by our Workforce Initiatives team, Abilities In Abundance provides job coaching, mentoring, training and follow-up support.