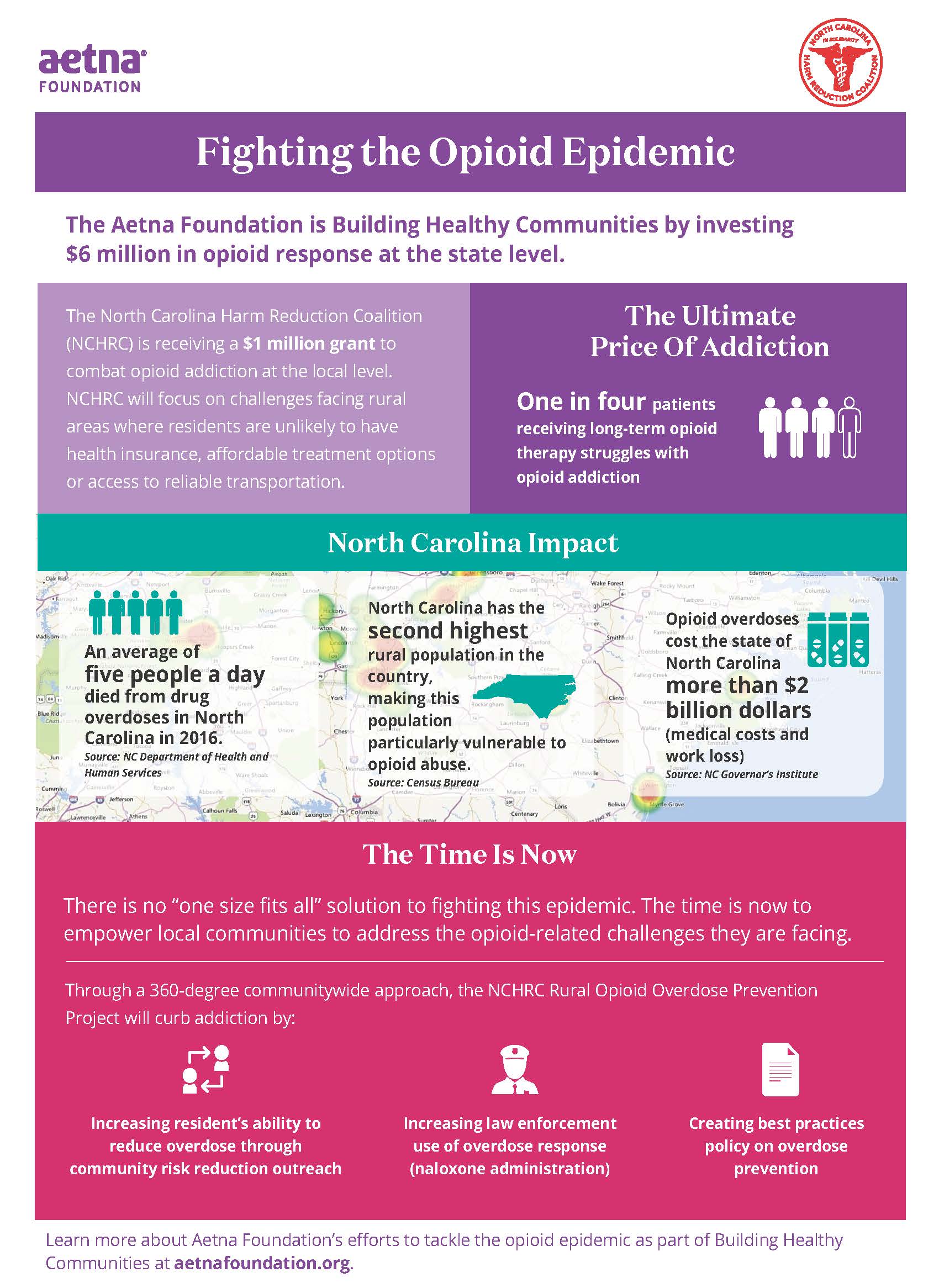 The Aetna Foundation is launching a funding initiative to fight the ongoing opioid epidemic in the U.S. and help communities and states that have been particularly hard hit. Grants totaling $6 million will fund state and local projects with the potential to make a real difference in addressing opioid-related challenges.

North Carolina will be the first state to receive a grant through the Aetna Foundation’s initiative. The North Carolina Harm Reduction Coalition will receive $1 million to help fund its “Rural Opioid Overdose Prevention Project.”

“While this is a national health crisis, there is no single solution that can be applied across the country,” said Harold L. Paz, M.D., M.S., Aetna’s executive vice president and chief medical officer and member of the Aetna Foundation Board of Directors. “These grants will provide important resources to empower local communities to address the unique characteristics of the opioid-related problems they are facing.”

In a survey conducted by Morning Consult, 77 percent of respondents said the role of local communities and community organizations are important in fighting the opioid epidemic. The survey was conducted from Feb. 8 through Feb. 12, 2018, and 2,201 adults participated.

More than 12 million people in the U.S. misuse prescription opioids, according to the most recent data from the United States Department of Health and Human Services. The number of overdose deaths involving opioids in 2016 was five times higher than in 1999, according to the Centers for Disease Control and Prevention.

The Aetna Foundation will be announcing grants to other organizations in additional states over the next several months as part of its mission of Building Healthy Communities by supporting locally-based programs, dynamic partnerships, and proven models that can help accelerate progress everywhere.

“For the first time in our history, our children’s generation is not expected to live as long as our own. That is due in large part to the epidemic of opioid abuse, which presents a clear and present threat to our communities and health care resources,” said Garth Graham, M.D., M.P.H, president of the Aetna Foundation and vice president of Community Health for Aetna. “The innovative work that the North Carolina Harm Reduction Coalition is doing on the ground is promising, and it’s our hope that it can also offer a road map for outreach in other rural communities.”